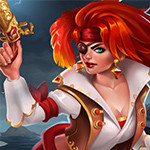 Pirates 2: Mutiny, sail the high seas and follow the treasure map in this arcade slot.

In this game: there's up to 3 random features in the base game. You can also filll at least 2 rows for a win multplier. Get 7 free spins when you roll 3 scatters.

Ahoy pirate! Play one of the most attractive slot games, Pirates 2: Mutiny slot by Yggdrasil and win up to 4,900x the bet! Set those sails for a new adventure filled with spectacular features such as Cannon Blast, Tsunami, and drop down wins for an adventure that is equally thrilling as it is rewarding. We are not running a rig here as this game is full of unexpected surprises that will thrill you every step of the way!

If you manage to get three Scatter symbols during the base game, you will win 7 free spins. One high symbol will be chosen to replace all other high-paying symbols, thus allowing you to win more. That symbol remains active throughout the bonus round and of course, multipliers are applied.

See if a pirate’s life is really for you! If you land a massive 3x3 symbol series, it can reveal 9 matching symbols that guarantee an impressive win!

The sea is not on your side today? Cannon Blast is randomly activated on any losing spin. The cannon will let all the low-paying symbols explode and set new winning opportunities free!

You might not be an old sea dog, but you can easily become one playing our Pirates 2: Mutiny demo mode. At the very least, you’ll learn how to navigate stormy casino seas. Learn all about the options in front of you, activate features, and feel the coins landing in your treasure chest! But shiver me timbers, are those real coins? No, because you can use virtual ones to get used to the game before you start playing for real. Yes, we are so generous that we let you play without even registering!

Released in December 2020, Pirates 2: Mutiny is one of the mobile slots that looks equally impressive on a desktop. Every single element of the game contributes to the pirate feel. When you start the game, you’ll be transported to a shipwreck where all sorts of shady characters await. No sharing of rum here, but maybe a payout or two. The release also features a sensational epic soundtrack that makes you feel like you’re beside Jack Sparrow on yet another quirky quest. Yggdrasil hit a jackpot with this one as it captures your imagination from the very first second.

Play Other Slot Games by Yggdrasil

At this online casino Canada you’ll encounter many popular software providers, but Yggdrasil is one of the most creative ones around. Not only does every title produced by this powerhouse look absolutely hypnotic, but it also has stellar features that elevate the experience. Explore the exotic, far-away destinations in Easter Island 2, challenge the Double Dragon, or play a more classic release under the name of Lightning Joker.

Yo ho ho, we see some great pirate slot games on the horizon! There is no way you can get enough thrilling chests full of riches, handsome pirates, and funky little parrots, so we decided to thrill you with even more titles of this kind. Play Pirate Gold Deluxe ,Pirates Charm, or Pirate Gold!

Pirates 2: Mutiny online slot machine is a game played on a 5x5 grid. All payouts are achieved in clusters. Namely, every time you land at least 6 symbols the game will remove the remaining ones, making room for new symbols and new wins.

The low-paying symbols are card values, as expected:


The ship’s crew is the most rewarding:


When the entire row is filled up with winning symbols, a multiplier is applied to the total win. Multipliers are listed on the right side of the matrix.

To play the game you will have to adjust the bet amount. Then, play up to 1,000 auto-spins or click the spin button every time you wish to put the reels in motion. The maximum win these experienced pirates promise is 4,900x the stake.