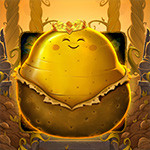 Being a couch potato never felt so good! The fanciest of all potato-themed video slots, Royal Potato online slot is ready to reward up to 30,000x the bet for any players willing to take a bite of it! Engage in steaming hot gameplay, sprouting with attractive features, neat payouts and Print’s Studios’ expertise. This is one hot potato we’re not keen on passing around to anyone but you!

The Royal Potato game has more features than we can count, just like potatoes have more than one way to be prepared. Let’s taste these mouth-watering features!

Once you land 3, 4 or 5 Scatter symbols, you will win 10, 12 or 14 free spins respectively. The adrenaline-packed bonus round starts with a sticky 2x1 jumbo symbol (Wild) in the very centre. As a Wild, it will replace symbols but only highlighted symbols (these can change throughout the game). The Jumbo symbol may grow up to 5x5 in size, covering the entire playing board.

Thin vines between reels are where 14 SuperSpinners can grow. SuperSpinners may be active or not, come in all sorts of sizes and serve as multipliers to winning combos that go through them.

The Royal Levy feature makes every single King or Queen symbol on the board hand out a random prize, multiplied by the sum of all SuperSpinner values.

You can roast, mash, scallop, french fry them and even make poutine with potatoes, but playing Royal Potato slot online is a bit different from kitchen play.

To play this lavish game successfully, we suggest trying it in demo mode first. It is equipped with all the features real money mode has, but you can play it without real money bets. Virtual coins might not bring you real money wins, but they will season your upcoming sessions with experience, the most precious of all gaming ingredients.

Royal Potato is a mobile casino game that was first released in December 2021. Nothing like a potato to survive the long cold winter! However, this is not your ordinary tuber, but a fancy-looking veggie, the king of the Irish food pyramid and the beloved side dish that rules homes across the globe.

In the Royal Potato slot machine, it’s all about being royalty and a member of the veggie court. Humorous and incredibly detailed, the game is vibrant and packs a good punch in representing Viennese palaces in a whole new light. There is nothing bland about it and soon enough, you will sway in the rhythm of the waltz.

Print Studios always knew how to create oddball mobile slots and desktop slot games. Players simply adore the way this supplier takes regular objects and puts them in unexpected circumstances. Enjoy some of the best online slot machines this provider ever released in our casino. Perhaps start with Out of the Ice, Crystal Golem or Book of Destiny.

Royal Potato is an extraordinary game, but just like french fries - you can never have only one! Lucky for you, LeoVegas team prepared a whole buffet full of tasty gaming delicacies with mouth-watering payouts. Grab a plate and join the line to play Fruit Duel, Fruit Storm or Chicken Chase. Alternatively, see what’s cookin’ in our LeoVegas live casino.

How to Win Royal Potato

A potato is a simple veggie and Royal Potato is a simple game, unlike megaways slots. The 5x4 grid is equipped with 30 paylines and each can be triggered by landing at least three of a kind in adjacent reels. It doesn’t get simpler than that!
The highest-paying symbols are their excellencies. Members of the Royal Potato court are:


Then, we also have some low-paying symbols:


Additionally, you might also notice a special form of Wild symbol:

- Jumbo symbol - may replace any other symbol, depending on its size.

How to Play Royal Potato

The biggest button in view is the Spin button and you must use it to set the reels in motion. If you like, you can also activate up to 1,000 auto-spins and watch the reels turn all by themselves while you use both hands to take down a big bowl of poutine. However, before your first spin, don’t forget to set the stakes by hitting the two pointers next to the bet amount. For more information, consult the menu.