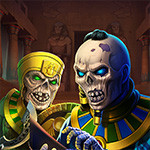 Curse of the Mummies

About Curse of the Mummies slot

Curse of the Mummies is Blue Guru Gaming’s first Egyptian slot release and as one of the most popular slot themes in the world, there are high expectations surrounding the slot. Especially given the fact, this is a collaboration between themselves and Relax Gaming. However, from an aesthetic viewpoint, this slot looks a lot different to most Egyptian slot games as it has a significantly darker theme than previously seen. In the depths of the Mummies pyramid there lies a mysterious wall filled with Egyptian-themed symbols across 5x3 reels with 243 paylines.


Curse of the Mummies Base Game Features

During the base game, there are one special feature and this is the ‘Rise of the Crypt’ feature. Which can be activated during any spin of the base game and will randomly turn a symbol into a scatter or a wild. There are also wild and scatter symbols readily available during the game to provide higher payouts than normal.

When five scatter symbols appear on the reels, players will receive 15 free spins with a multiplier value. However, with both normal and super scatters available the value of each scatter may change. Normal scatters will contribute a value between 1x and 5x while super scatters provide a 10x value for the full duration of the bonus round. Meaning that if you landed five super scatters, you would receive 50x as your starting multiplier!

Looking to reactivate the bonus round? This can be done by landing five additional scatters during the bonus which will provide you with +5 free spins. However, that’s not all, with each retrigger you will also receive between 1x and 5x added to your multiplier with each scatter.


Slots Similar to Curse of the Mummies

Unlike Blue Guru’s previous release of the Octopus Armada slot, there are a multitude of games with a theme similar to Curse of the Mummies. One of the most popular games with this theme is the Book of Dead slot game which is the current standard bearer when it comes to Egyptian slots. Released at the start of 2016, this Book of Dead slot immerses you straight within these ruins surrounded by exotic Egyptian-inspired music and sound effects, which plunge you even deeper within the game’s atmosphere. As these two games have similar themes, why not check them both out and see which one you prefer?

Looking for more Blue Guru Games slots? Check out Octopus Armada which is a five reel and three row slot, Octopus Armada is a 15 payline video slot with the pays both way feature, which means that there are a multitude of ways to win from left to right and right to left. There is an alien theme based on the panspermia hypothesis that is unlike any other slot available. Set in outer space with a view of the earth from the moon, there is a somewhat beautiful setting despite the darker theme.


Game Info about Curse of the Mummies

Curse of the Mummies is an online slot game created by Blue Guru Games. The slot is played across 5 reels and 3 rows with a total of 243 paylines, there is high volatility.


How to play Curse of the Mummies Slot

Curse of the Mummies plays out like most online slot games; to begin with, you must set your stake by clicking on the coin icon. All bets you place will be placed per spin rather than per payline. There is also an autoplay feature which can play up to 100 times automatically if your balance allows.
Once you are content with your stake, you can manually spin the reels using the large spin button.


LeoVegas also has this to offer

This fantastic addition to our online slots catalogue is joined by thousands of other slot games available at the click of a button. However, casino fans may also find our extensive range of Live Casino games to their liking. These games may be a little more linear than the release mentioned above but still offer fantastic winning potential.

Curse of the Mummies Slot Review

As one of our top Egyptian themed slots, Curse of the Mummies only adds to the brilliance of game variants associated with the popular theme. The extremely high potential attached to the free spins multiplier feature is one that can make or break a gameplay experience, especially in highly volatile slots like Curse of the Mummies. There is a very good jackpot-sized prize available if players can reach the maximum win value and generally, the gameplay is a very high standard.