Between 11th June and 11th July, join in the fun on Playtech’s Who Wants to Be a Millionaire? Live Trivia game to be in with a chance of winning a share of €100,000! Best of all, participation is FREE!

Check out the game schedule below to discover the exact dates and times when the game will be taking place throughout these 31 days!

On Playtech’s Who Wants to Be a Millionaire? Live Trivia game.

This is a live game show with a prize that is presented by a live host, consisting of a series of increasingly difficult multiple-choice questions, each with four possible answers. This is not a game of chance, but rather the questions and the order of the questions for each game are exactly the same for all users.

What happens if none of the players win the game? The prize pool will roll over and be added to the shared prize pool in the subsequent game! 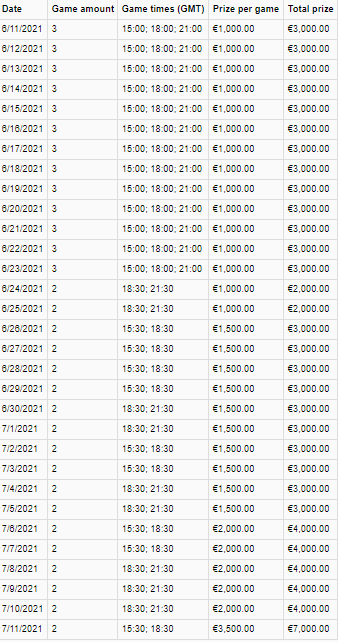 The time format in this document is GMT.

The Who Wants to Be a Millionaire? Live Trivia game (the “Game”) will be active every day at certain times based on the schedule below for the duration of the Promotion Period.

The Game is a live game show with a prize that is presented by a live host. The Game consists of a series of increasingly difficult multiple-choice questions, each with four possible answers. The Game is not a game of chance. The questions and the order of the questions for each Game are exactly the same for all users. Players who answer the question correctly within the 15-second limit are moving on, with the rest being eliminated from further participation in the relevant Game. Players who answer all questions correctly receive a part of the shared prize.

The shared prize for each Game will vary from €1,000 to €3,500 based on the prize distribution below with a total sum of €100,000 during the entire Promotion Period. In the event that none of the players win the Game, the prize pool will roll over and be added to the shared prize pool in the subsequent Game.

The answers and questions as well as the sequence in which they appear are provided by an independent third-party supplier, Alphabet Media Ltd, (Trading as The Question Co) (the “Third Party Supplier”). LeoVegas does not bear any responsibility, and shall not be liable, for the outcome of the Game as a result of incorrect answers supplied by the Third-Party Supplier.

The Game is free of charge and does not require any funds in the player’s account. There are no preconditions apart from using a desktop or mobile platform.

Players can only participate if they answered the first question correctly and remain present for the entire duration of the Game. Following the first question, new players may not participate in the Game. Prior to the beginning of each Game the host shall communicate to the players what type of “life-lines”, if any, will be applicable to each Game. Each Game length duration is approximately 15 minutes.

Questions are asked one by one with approximately a 30-second pause between them. The number of questions for each Game shall be determined by the host or LeoVegas at their sole discretion and communicated to the players prior to the start of the Game.

Claim Cards need to be claimed within 7 days (168 hours) of being added to the players’ account.

Claimed cash prizes are in real money and carry no wagering requirements.

Cash winnings can then be used in our Casino, Live Casino and Sportsbook.

The winning players shall be solely liable for any relevant taxes, if applicable, in order to legally claim the prize.

Players undertake not to:
use the Game in any manner that could disable, overburden, damage, or impair the Game or interfere with any other party's use of the Game, including their ability to engage in real time activities throughout the game and or,
use any robot, spider, or other automatic device, process, or means to access the game for any purpose, including monitoring or copying any of the material on the game or collecting information about other users and or,
introduce any viruses, trojan horses, worms, logic bombs, or other material which is malicious or technologically harmful and or,
attempt to gain unauthorised access to, interfere with, damage, or disrupt any parts of the Game, the server on which the Game is stored, or any server, computer, or database connected to the Game and or,
select or use as a nickname a name of another person with the intent to impersonate that person and or,
use as a nickname a name subject to any rights of a person other than you without appropriate authorisation and or,
use, as a nickname, a name that is otherwise offensive, vulgar or obscene.

Players agree to register only once and maintain one (1) Game account for player’s personal use of the Game. It is a condition of the use of the Game that all the information the player provides through the Game is correct, current, and complete. Player agrees to maintain and promptly update his\hers Game account information to keep it true, accurate, current, and complete. If a player provides any information that is untrue, inaccurate, not current, or incomplete, or LeoVegas has reasonable grounds to suspect that such information is untrue, LeoVegas may suspend or terminate the player's Game account. Any fraudulent information provided in connection with player’s use of the Game may be reported to relevant state and federal law enforcement agencies, and LeoVegas will cooperate to ensure that violators are prosecuted to the fullest extent of the law.

During the Game players may use the chat option to communicate with other players. The host may see the chat and use it to refer to particular queries in his/her sole discretion.

In case of any technical problems that may affect the regular Game flow, the Game may be postponed or cancelled. Technical problems in the middle of the series of questions do not void the game unless stated otherwise during the Game. LeoVegas will not be liable for if, for any reason, or any part of the Game is unavailable at any time or for any period. From time to time, LeoVegas may restrict access to some or all parts of the Game to registered users.

In the event that a winners’ account has been closed (by the player or LeoVegas) prior to the award of the prize, and provided that the Player remains eligible to receive the prize under applicable law and the LeoVegas’s Terms and Conditions, reasonable efforts will be made to contact the prize winner via email or other method.

In the event that a winners’ account is deemed to be ineligible (for example found to be underage, or invalid id or verification), LeoVegas reserves the right to withhold payment of the prize and if necessary award the prize to an alternate entrant.

There is no alternative to the prize offered hereunder in whole or part and in any event, redemption and\or exercise of prize payments can only be made in accordance with the General Terms and Conditions of LeoVegas. See: https://www.leovegas.com/en-row/terms

If an act, omission, event or circumstance occurs which is beyond the reasonable control of LeoVegas and which prevents LeoVegas from complying with these Terms and Conditions LeoVegas will not be liable for any failure to perform or delay in performing its obligation. It is hereby clarified LeoVegas will use reasonable endeavors to rerun any game cancelled pursuant to this Section, in which case LeoVegas will communicate the date and time of the applicable game to the players.

LeoVegas’s decision in all matters is final and binding and no correspondence will be entered into.

LeoVegas reserves the right to amend or cancel this Promotion or amend these Terms and Conditions: without notice if the change or cancellation is a result of any legal or regulatory change.

This week, €5,000 worth of cash prizes are up for grabs in our Hold The Jackpot Cash Drop when playing any of the participating games!