Win With the Cheshire Cat Bonus!

From now until 11th April, you could win a share of 540,000 USD (or currency equivalent) when playing on Adventures Beyond Wonderland during the promotional hours. Click here to get all the details!

The cat’s out of the bag! From now until 11th April 2021, a purr-perfect promotion will be running on Adventures Beyond Wonderland in our Live Casino, every day between 09:00 and 05:00 GMT.

During these promotional hours, the Cheshire Cat Bonus will take place 20 times per day, each time with 500 USD (or currency equivalent) in cash to give away, for a total daily prize pool of 10,000 USD (or currency equivalent). To preserve the element of surprise, the 20 daily bonus rounds can trigger at any time during the promotional hours. So keep an eye out for them! 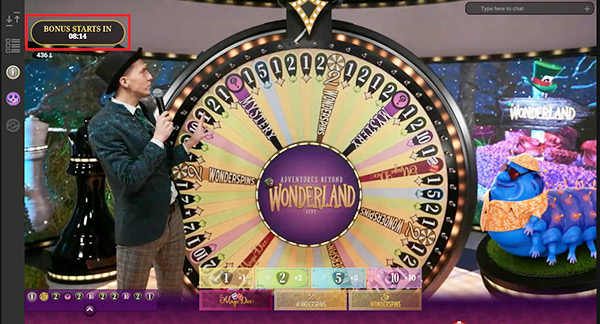 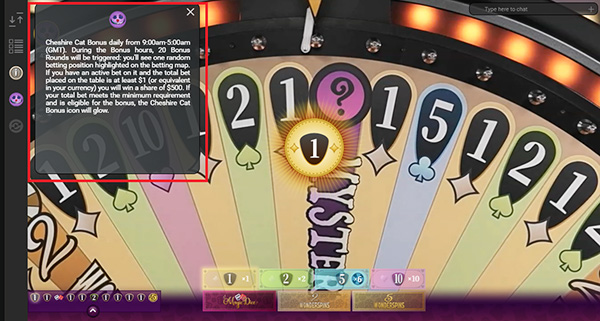 How can you try your luck for a share of this, you ask? To be eligible for the Cheshire Cat Bonus promotion, all you have to do is place a minimum bet of 1 USD (or currency equivalent) on Adventures Beyond Wonderland during the promotional hours mentioned above.

When the RNG bonus round is triggered randomly, if you have placed a bet of at least 1 USD (or currency equivalent) on the winning bet spot, you’ll win a share of that particular round’s 500 USD prize pool (or currency equivalent), on top of the normal winnings that result after winning that round. Any of the 7 bet spots on the wheel can be triggered by the Cheshire Cat Bonus round, so it’s up to you which segment you want to place your trust in: 1, 2, 5, 10, Magic Dice, 2 Wonderspins or 5 Wonderspins.

The ‘Cheshire Cat Bonus’ promotion period runs from 09:00 on Wednesday the 17th of February until 05:00 on Sunday the 11th of April.


The time format in this document is GMT.

Winnings will be paid out as Claim Cards on players’ accounts. Players will need to go to their ‘’My Offers’’ page to claim any reward.

Cash prizes are credited to winners' "My Offers" page within 72 hours of winning. Claimed cash prizes have no wagering requirement.

The cash winnings need to be claimed within 7 days of being credited to a player's account and have no wagering requirements.

Currency conversions shall be calculated as at time of promotion win and on the basis of Oanda exchange rate: https://www1.oanda.com/currency/converter/

Player needs to place a bet of at least 1 USD (or currency equivalent) on the Adventures Beyond Wonderland live table in order to be eligible to participate in the Cheshire Cat Bonus promotion.

For the avoidance of doubt, higher bets do not change the player’s chances of winning a share of the bonus round.

The total prize pool for the entire promotional period sums up to 540,000 USD (or currency equivalent).

When the Cheshire Cat Bonus is active, the user interface notifies the player.

In the bonus round, only one of all betting positions is picked by the RNG system and highlighted in the user interface.

If the player has a bet placed on one of the betting positions picked by RNG – he/she receives a share of the bonus round prize of 500 USD (or currency equivalent) which will be divided equally between the winning players of that round.

The RNG Cheshire Cat Bonus is not related to the winning result of the Adventures Beyond Wonderland live game.

There is no limit on the number of times a player can win a share of the 540,000 USD (or currency equivalent) prize pool of the Cheshire Cat Bonus during the promotional hours of the promotional period.

All prizes will appear in USD. The winning players will be paid their share of the prize according to the currency of their account in accordance with the exchange rate applicable on the day of payment. LeoVegas bears no responsibility for any exchange rates or conversion rates.

LeoVegas bears no responsibility whatsoever for any wins\losses as a result of prize won by the players.

In the event that a winners’ account is deemed to be ineligible (for example found to be under age, or invalid id or verification), LeoVegas reserves the right to withhold payment of the prize and if necessary award the prize to an alternate entrant.

LeoVegas reserves the right to amend or cancel this promotion or amend these Terms and Conditions: without notice if the change or cancellation is a result of any legal or regulatory change.

Kick off every weekend

in the Wild West!