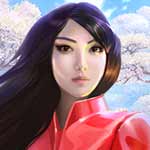 Sakura Fortune, join the beautiful Japanese princess as she fights evil in this slot.

Look out for: Stacked wilds on middle reels that act as scatters, land 2 of them fully stacked for the respin feature, and 3+ scatters from left to right trigger free spins where wilds turn sticky.

Sakura Fortune slot by Quickspin is Kill Bill of the gaming world. This captivating story of revenge and love in ancient Japan can pay you up to 8,000x the bet amidst a plethora of attractive features. Watch the cherry blossoms fall, and contemplate as you spin 5 beautifully designed reels that bring great prizes. Regardless of whether you look for an action-packed title or a melodramatic romance, this is one of those slot games that has something for everyone!

Some players might think that Sakura Fortune is a highly meditative slot, but let us tell you - it is stacked with dynamic features you can’t miss!

Bonus Scatter (yellow fan) can appear anywhere on the board. Land three or more in a single spin to activate the Free Spins feature. Princess Wild will expand to fill out the whole reel, and stay there until the end of the round.

Sakura Fortune Respin can be triggered once you land two full stacks of Princess Wild. The total number of respins is determined by the number of wilds on the reels when the feature is triggered. For instance, two stacks of Wilds guarantee two respins. For every Wild you land, you get one respin more. During this feature, you can also land Free Spins!

We all know, there is no point in having a sword if you don’t know how to use it! That's why we’re here to teach you! Like all other online casino slots you’ll find on our website, Sakura Fortune slot has a free demo. Activate the demo mode to play the game without risking your real money. Play with virtual funds not only to check out the features and the overall gaming experience, but also to learn how to control your emotions, and your budget. And best of all, you don’t even have to sign up! Once you become the main samurai in town, simply switch to the real money mode.

The main character in this 2017 release is Princess Sakura, the lady wearing a red dress. She is skilled with her samurai sword, but also reels! Her presence is what dominates this mobile slots masterpiece. Set in a beautiful garden, full of cherry blossoms and Japanese iconography, this game successfully flirts with both violence and romance. Despite never showing graphical violence, it does build tension like no other asian game we’ve seen on the market.

Founded in 2011, Quickspin was one of the first companies to utilize the rising popularity of online gaming. With a strong portfolio, and a dedicated and brilliant team, it releases a couple of highly-anticipated titles every year, and Sakura Fortune is only one of them. Currently, the studio has close to 100 slot machines in its portfolio, but that number is constantly growing. Some of the most prominent Quickspin titles in our online casino are Vampire Senpai, Second Strike, and Big Bad Wolf Megaways.

If you liked Sakura Fortune online slot, you will probably long for more fun asian games. Our team makes travelling to distant locations so easy! All you have to do is use the search bar to find them, or check out our recommendations. Our members typically love Three Samurai, Tokyo Dragon, and Samurai Ken.

The base game is played on a standard 4x5 grid, with 40 bet lines. To land a win, you have to get three symbols of the same kind in adjacent reels, on one of the paylines. Pretty simple, right? The symbols, all inspired by Japanese culture, pay as follows:


Princess Sakura is the Wild and Scatter 4x1 symbol. She appears only on reels 3, 4 and 5, and can substitute any other symbol.

To play this thrilling casino game, you will first have to decide how much you want to stake. Use pointers next to the bet amount to choose anywhere between $0.20 and $100. Then, press the spin button, or simply activate up to 1,000 spins and watch the reels roll.The maximum win is 8,000x the bet!