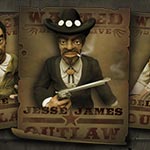 Dead or Alive, chase bandits through a desert storm in this old western-style slot.

Look out for: 3 or more gun scatters to stroll into the bonus shootout where 12 free spins, double wins and sticky wild wanted posters all await in shoot'em up mobile casino style.

Game facts: Duel your way through the 5 reels and 9 paylines of this NetEnt slot and be the fastest to draw riches. Will you leave Dead or Alive? Find out at LeoVegas!

Howdy, partner! Dead or Alive is an iconic wild-west slot game from NetEnt. From the graphics to the sound effects, the slot manages to successfully create the atmosphere of cowboy films. The 5x3 grid with 9 fixed paylines takes you to a city of outlaws on a cloudy day. There’s a lot to take in this slot with payouts up to 12,000x your stake.

Dead or Alive is a high volatility slot where the big money comes from the bonus features. Just like in a western movie, you will need to catch some outlaws to get your hands on the prizes. Here’s what you need to know!

Look out for the posters marked with “Wanted”, as you’ll need to catch the bad guys. Seems like the sheriff is looking for a gang. There are a bunch of outlaws on the posters, and each of them is a wild symbol that becomes sticky and stays in place throughout the free spins that we’ll cover below.

The free spins feature by landing a minimum of 3 scatters on the reels. The symbol is represented by some guns. You’ll be taken to the saloon, where the free spins bonus will bring you 12 free games. During the free spins, all wins get a 2x multiplier. Remember that the wild symbols get sticky during the bonus round. Should you land another set of scatters, the feature will retrigger.

How to win on Dead or Alive

You’ll need to land at least 3 symbols of the same kind on a payline to trigger a winning combination in Dead or Alive. The base game symbols include a variety of western-themed elements, such as a sheriff badge, a hat, a gun belt, some boots, a shot of tequila, and playing cards. The best paying symbol is the scatter, followed by the wild, and then the base game symbols. Out of those, the sheriff badge is the best paying.


How to play Dead or Alive

You can play Dead or Alive on any device you’d like, be it a PC or your smartphone. To place a bet, use the +/- buttons to adjust the stake. Press the big round Spin button once you are ready to start the reels. The paytable is available under the button marked with “i”. You’ll find the full list of rules and payouts there.

The Dead or Alive game was launched in 2009, being a hit right from the beginning. The catchy wild-west theme and the free spins bonus with multipliers and sticky wilds made this online slot one of the most sought after. It continues to expand its fan base years after the launch, which can only stand as proof of its special gameplay. Get your guns ready to shoot for some wins!

NetEnt is one of the best game developers out there. If you liked this slot, you’re going to like this selection as well: Jack Hammer, Spinata Grande, Dracula.