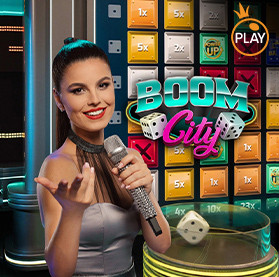 If you're looking for a live game show with live dice and three bonus games, why not give Boom City from Pragmatic Play a try. Within the game, which features a live host, players will bet and predict the outcome of two dice, and it is from this prediction, that players can qualify for one of three bonus rounds, the dice battle, lucky drop, and boom or bust. Played on a 6x6 grid with each of the 36 squares offering a different outcome, there is the chance for players to multiply their bets up to 20,000x their stake. So if you're looking for a dice game with a twist, why not give Boom City a try.

Taking to the lively neon streets of Boom City, this online slot is packed with high-quality visuals and transforming mechanics that allow players to bet and predict the outcome of two dice. The Boom City slot by Pragmatic Play, has a 6x6 reel and a chance to win a max prize of up to $500,000 with multipliers up to 20,000x the bet.

What are the special features in Boom City

Boom City contains a range of transformative mechanics to create a unique online slot including the option for players to bet and predict the outcome of two dice, as well as three bonus games and a PowerUP feature.

Players can trigger the PowerUp Bonus in Boom City, swapping bust icons for a 1x multiplier and increasing other multipliers. Extra dice are then rolled to provide a chance to win the bonus rewards.

This provider also have this to offer

Boom City is just one of the many games in the Pragmatic Play collection, including options such as:

- Return of the Dead - Triggers wild symbols and bonus features in this mysterious, desert-themed online slot

- Buffalo King MEGAWAYS - American Wild West slot with up to 200,704 ways to win

Gonzo’s Treasure Hunt Live by Evolution carries similar features to Boom City with live-hosted game shows and similar bonus features that enable multipliers of up to 20,000x the bet.

How to win in Boom City

Boom City is played with two dice to decide the outcome. The gold dice are associated with the vertical and the horizontal is decided by the blue dice. Taking place over two stages, players will initially bet on the square that will be selected after rolling the two dice. If the selected square is a bonus game, one of the three bonus games will begin.

To win, players must have a bet on the correct coloured square that is selected after rolling the two dice. Landing on a bust square will bring the game to an end.

How to play Boom City

Before placing your bet, you will need to adjust the bet to an amount you are comfortable with. Once you have decided, you can then predict which square the dice will land on. If you do land on the bonus game square, one of the three bonus games will be triggered as part of the second stage of the game.