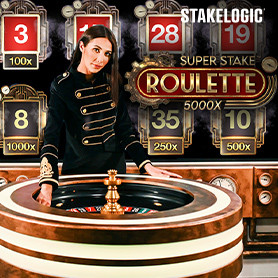 When it comes to roulette, there are many variations available in the LeoVegas live casino. However, now we’ve taken a journey to the world of steampunk in an immersive roulette game which features multipliers of 5000x your stake. Developed by Stakelogic, Super Stake Roulette is played in a live studio that features not only the traditional roulette wheel but also the bonus multiplier wheel. Place your traditional bets in the base game, and then if your number is a silver or golden number shown on the screen behind the wheel, there is a chance to win potential multipliers up to 1000x your stake. It’s these golden numbers which play a part on the money wheel, which is spun and can award players instant win amounts between 100x and 1000x, and it's this wheel where players can also land on the 5000x multiplier. So why not see if you can trigger the bonus rounds as you play at LeoVegas today?