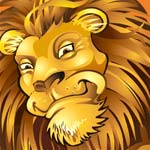 Mega Moolah, an extraordinary slot machine with some of the biggest prizes around.

Look out for: lion wilds which double wins, 3 or more monkey scatters for free spins, and a randomly triggered bonus game with 4 different progressive jackpots waiting.

Game facts: Climb to the top of the food chain over 5 reels and 25 paylines in this Mega Moolah jackpot slot by Microgaming. Go for a spin and tour for treasure at LeoVegas.


The Mega Moolah game by Microgaming is a record-breaking progressive jackpot game that has made more millionaires than any other game. The slot takes you on a safari in Africa and is played over 5 reels with 25 fixed paylines. Mega Moolah offers multiplier wilds and free spins with multipliers - and, of course, four progressive jackpots that have the potential to pay out 7-figure winnings!

The game has a 5x3 layout and was first released back in November 2006. It has been around for quite some time. However, it remains one of the most popular, because of its massive payouts.

This is a low variance game, which means you land wins quickly. This only applies to the smaller ones (don’t expect jackpot wins that often!). Aside from the four jackpots, the maximum win per spin is 1,955x your stake, which is pretty decent in itself.


The game has an African safari theme and is set against the infamous Serengeti backdrop, with cartoon-style graphics. Visually, the game looks bright, colourful, and fun. The soundtrack matches the theme, with traditional African tribe music accompanying your gameplay.


How to play Mega Moolah


The buttons in this slot are a bit different from the standard ones. To set your stake, click on the coins icon from the menu. Once you set the bet, you only need to click the Spin button. If you’d like to see the full set of rules and details of the game, click on the three-lines icon and then on the “i”.


How to win at Mega Moolah

In terms of game symbols, the low-paying symbols are the playing cards (10 to A symbols). However, ideally, you’ll land the higher paying symbols, represented by Kudu, Buffalo, Giraffes, and Elephants. The Elephant symbols payout the most, worth between 0.24x up to 30x your stake for between 2 and 5 on a payline.

Another symbol you might want to land is the Lion wild symbol. Not only does this substitute for all other pay symbols to create wins, but all of those wins that are created with a wild symbol will be doubled. In addition, they are also highly valuable in themselves, paying between 0.6x and 600-times your stake for 2, 3, 4, or 5 on a payline.

Finally, there is a witch doctor scatter symbol, which we will look at in the next section.


The Mega Moolah jackpot slot game has a handful of main bonus features. Apart from offering multiplier wild symbols, there is also the Free Spins round with a 3x multiplier. The game focuses mainly on the Jackpot Bonus game, which is randomly triggered. This is where you can win one of the four possible progressive jackpots!


You'll want to land the witch doctor scatter symbol as often as possible. If you land 3, 4, or 5 witches on the grid, you will get an automatic payout. You will also activate the free spins feature.

You will be awarded 15 free spins, and all the wins you will hit during those will be tripled. In addition, if you land another 3 scatters in the free spins round, it will get retriggered.


Without a doubt, the main attraction of the Mega Moolah game is the Jackpot Bonus Game feature, offering mega money wins. You can trigger this round during any random spin.


As we mentioned previously, this is a pretty old slot game. However, Microgaming has revamped it since then using HTML technology, so you can play it on both mobile and desktop. The chance to become a millionaire is never further away than your mobile phone. So, wherever you are, whenever you want, you can play Mega Moolah!

Even if the game wasn’t a progressive jackpot game, it would still be a great game to play, given that even in the free spins round you can win up to 1,995x your stake. This is more than what lots of other games offer! Throw the progressive jackpot on top of that, and it’s something to go wild over.


Microgaming has plenty of exciting games on offer. At LeoVegas you can play many of their hits, such as Thunderstruck, Immortal Romance, or Links of Ra.


At LeoVegas you’ll find a great variety of games from the best providers. Here are some other progressive jackpot games to play: Mega Fortune, Divine Fortune, Leprechaun Goes to Hell.